The store will not work correctly in the case when cookies are disabled.

Aubrey Russell Allen, Managing Director, approached Mats4U to find a solution to the problems they had with wet and slippery floors. The shop had one small mat in the doorway which was failing to perform, with water and dirt being tracked inside, causing a concern for health and safety.Allen are an award winning, premium butchers that have been established since 1933. The shop, based in Leamington Spa, has been open for over 30 years and sources produce from the best farmers in the UK, from Scotland to the South of England. In 2013, Aubrey Allen received the Royal Warrant, as suppliers of meat, poultry and game to HM The Queen. 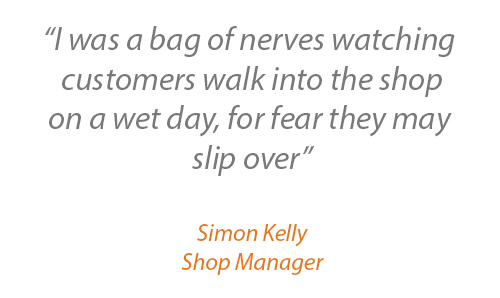 Mats4U conducted a mat audit, whereby they visited the shop and  observed the flow of foot traffic around  the shop. As a result, they recommended a large Waterhog Classic entrance mat, along with a logo mat, in order to provide a solution to their problem.

Waterhog entrance mats were selected due to their dirt and moisture stopping properties. They are the most effective mats at stopping dirt in the industry,  preventing 90% of dirt and moisture from entering the building. Customers don’t wipe their feet, but the mats will act to scrape dirt and water from footwear so that it is not tracked into the building.

Logo mats create a great impression for your customers. They will also mop up moisture and remove finer dirt and dust from shoes, to prevent slips and falls and keep floors clean.

When the mats were initially put down,  Russell Allen got back in touch to say  they felt that the mats were too big. Mats4U advised them that a  minimum of 12 feet of matting was required for the effective management of water and dirt, but offered them the option to change the mats if they insisted that they were too big.

After a week or so, Russell approved that the  mats looked fine,  and that it was just a big change from what they had in place previously.

On going back to visit the shop after one of the wettest January’s in history, Simon Kelly, the Shop Manager, expressed that he was very happy with the mats, commenting “these mats have been fantastic! The floor would have previously been very slippery, especially on a wet, snowy day like today.”

Helen Beverley, the Customer Service Manager, has worked for Aubrey Allen for over 25 years. Helen explained that the shop welcomes over 1500 customers per week, with people queuing in the street at Christmas time, adding that the new mats offer “more peace of mind” in terms of  health and safety.

To find out how anti-fatigue matting can help your business, contact Mats4U and request a free mat audit on your premises.